BANGKOK, March 7, 2022 – According to the International Data Corporation ’s (IDC) Quarterly Mobile Phone Tracker, Thailand’s smartphone shipments reached 20.9 million units in 2021, growing 20.9% to turn in the strongest growth among countries in the Southeast Asia region. In 4Q21, the market grew 16.6% year-over-year (YoY) to 5.5 million units as a result of seasonal promotions and a resurgence of sales in retail as lockdowns were lifted at the beginning of the quarter. Operators also regained share with a high quarter-over-quarter (QoQ) growth, accounting for almost a third of the smartphone market as the newly launched iPhone 13-series gained popularity.

5G-enabled smartphones contributed more than one-third of the total market in 4Q21 thanks to Apple’s iPhones and affordable Android phones such as the Samsung Galaxy A52s, vivo Y76, and Redmi Note 10. Thailand's 5G smartphone shipments were the highest in the Southeast Asia region in both 4Q21 and 2021, and the third highest in the Asia/Pacific (excluding China and Japan) region after India and South Korea.

“2021 was exceptionally strong due to pent-up demand, COVID-19 cash subsidies, and a wider availability of affordable 5G smartphones,” said Teerit Paowan, Client Devices Market Analyst at IDC Thailand. “IDC expects flat growth in 2022, but that is still 14% higher than pre-pandemic 2019. The merger between TRUE and Dtac is likely to result in strong competition between the resulting top two telcos to expand their subscriber bases in the short term. However, supply constraints will continue to be a bottleneck at least in the first half of 2022.” 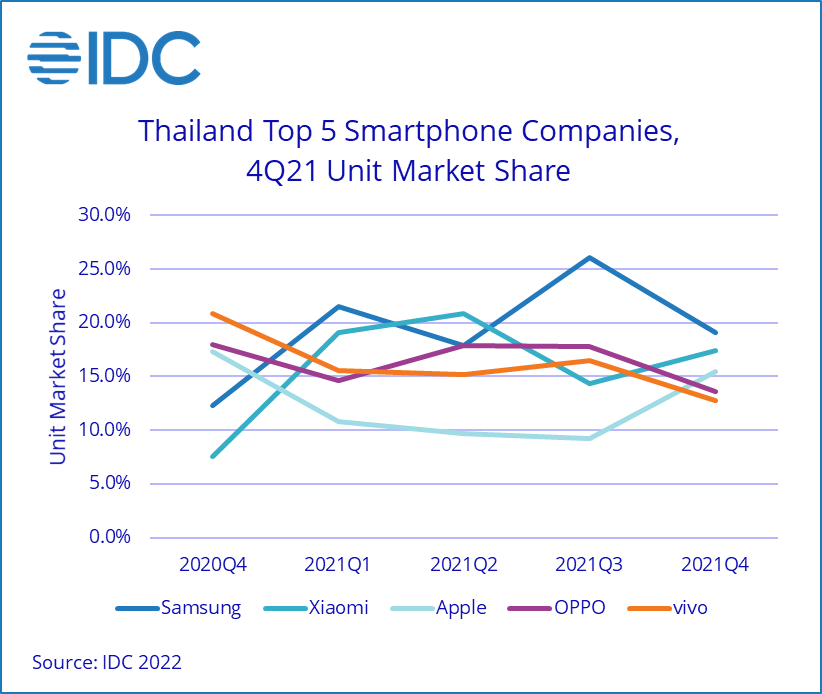 Samsung remained at the top spot despite some shortages on its A-series models. Promotions and incentives targeted at its flagship series resulted in continued uptake of its Galaxy S21 series as well as growth in its foldable smartphones.

Xiaomi jumped two spots to the number two position, as its shipments recovered for the affordable Redmi series. Xiaomi doubled down on its efforts to expand in the offline channel, opening 13 new Xiaomi brand shops in December.

Apple had a YoY and QoQ growth with the launch of the new iPhone 13 series, despite some temporary supply hiccups and prices that were higher than some of the 12 Pro and 12 Pro Max models.

OPPO had a tight supply in the low-end of its 4G portfolio. The mid-range Reno 6 received a good response, but the higher-priced Reno 6 Pro had a tepid performance with its channel presence limited to OPPO-branded stores and online channels.

vivo’s shipments were hit hard by supply shortages in the low-end Y-series. vivo strengthened its presence in retail and telco stores with more sales personnel.

“Supply has been constrained, especially for low-end 4G smartphones, and smartphone brands are adapting to make the best of their situation by adopting emerging chipmakers like Unisoc and focusing the best-selling models,” said Paowan. “Some of the smaller players such as HMD (Nokia), Lenovo (Motorola) and TCL made big leaps in the market during this time because of their focus on the affordable segment which was supply-constrained,” he added.

International Data Corporation (IDC) is the premier global provider of market intelligence, advisory services, and events for the information technology, telecommunications, and consumer technology markets. With more than 1,200 analysts worldwide, IDC offers global, regional, and local expertise on technology, IT benchmarking and sourcing, and industry opportunities and trends in over 110 countries. IDC's analysis and insight helps IT professionals, business executives, and the investment community to make fact-based technology decisions and to achieve their key business objectives. Founded in 1964, IDC is a wholly owned subsidiary of International Data Group (IDG), the world's leading tech media, data, and marketing services company. To learn more about IDC, please visit ww w .idc.com. Follow IDC on Twitter at @IDCASEAN  and LinkedIn. Subscribe to the IDC Blog  for industry news and insights.