NEEDHAM, Mass., April 11, 2022 – Global shipments of traditional PCs, including desktops, notebooks, and workstations, declined 5.1% in the first quarter of 2022 (1Q22) but exceeded earlier forecasts, according to preliminary results from the International Data Corporation (IDC) Worldwide Quarterly Personal Computing Device Tracker. The PC market is coming off two years of double-digit growth, so while the first quarter decline is a change in this momentum, it doesn't mean the industry is in a downward spiral. Despite ongoing supply chain and logistical challenges, vendors still shipped 80.5 million PCs during the quarter. The 1Q22 volume marks the seventh consecutive quarter where global shipments surpassed 80 million, a feat not seen since 2012.

"The focus shouldn't be on the year-over-year decline in PC volumes because that was to be expected. The focus should be on the PC industry managing to ship more than 80 million PCs at a time when logistics and supply chain are still a mess, accompanied by numerous geopolitical and pandemic-related challenges," said Ryan Reith, group vice president with IDC's Worldwide Mobile Device Trackers. "We have witnessed some slowdown in both the education and consumer markets, but all indicators show demand for commercial PCs remains very strong. We also believe that the consumer market will pick up again in the near future. The result of 1Q22 was PC shipment volumes that were near record levels for a first quarter."

The rankings among the top vendors remained unchanged in 1Q22 compared to the fourth quarter of 2021. Lenovo remained the top company with 22.7% market share, followed by HP Inc., Dell Technologies, and Apple. ASUS and Acer tied* for the number 5 position in 1Q22. Dell, Apple, and ASUS were the only top-tier vendors that saw year-over-year shipment growth. As a result of the on-going supply chain shortages and a challenging comparison to a strong 1Q21, notebook PCs saw a year-over-year decline while desktops grew slightly.

"Even as parts of the market slow due to demand saturation and rising costs, we still see some silver linings in a market that has reached an inflection point towards a slower pace of growth," said Jay Chou, research manager for IDC's Quarterly PC Monitor Tracker. "Aside from commercial spending on PCs, there are still emerging markets where demand had been neglected in the earlier periods of the pandemic, and higher end consumer demand also has held up."

*IDC declares a statistical tie in the worldwide Traditional PC market when there is a difference of one tenth of one percent (0.1%) or less in the shipment shares among two or more vendors. 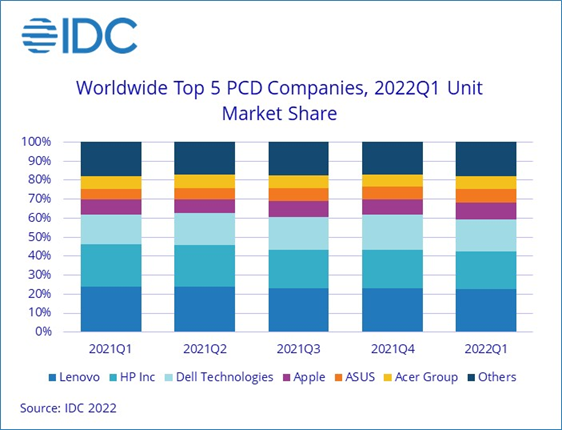 -    Some IDC estimates prior to financial earnings reports. Data for all companies are reported for calendar periods.

-    Shipments include shipments to distribution channels or end users. OEM sales are counted under the company/brand under which they are sold.

-    Traditional PCs include Desktops, Notebooks, and Workstations and do not include Tablets or x86 Servers. Detachable Tablets and Slate Tablets are part of the Personal Computing Device Tracker but are not addressed in this press release.

IDC Tracker products provide accurate and timely market size, company share, and forecasts for hundreds of technology markets from more than 100 countries around the globe. Using proprietary tools and research processes, IDC's Trackers are updated on a semiannual, quarterly, and monthly basis. Tracker results are delivered to clients in user-friendly Excel deliverables and on-line query tools.