INDIA, May 9, 2022 – According to the International Data Corporation ’s (IDC) Worldwide Quarterly Mobile Phone Tracker, India smartphone shipments declined for the third consecutive quarter, shipping 37 million smartphone units in 1Q22, a drop of 5% YoY. The opening of the year was relatively slower as compared with 1Q21, due to the impact of the third wave of COVID, tight supplies especially for the low-end price segments, and rising inflation leading to increasing end consumer prices.

• The pandemic-induced surge in eTailer shares over the past two years subsided with a marginal drop to 49% in 1Q22, but with 7% YoY growth in shipments. The growth came from multiple sales events such as Republic Day, Valentine's Day, etc., combined with online exclusive offers. Offline channel shipments fell by 13% YoY. Despite no major COVID-related restrictions on movement, retail footfall remained low through the quarter.

• ASPs continued to rise for the fourth consecutive quarter, hitting an all-time high of US$211, on the back of increased prices both for existing and newly launched devices. MediaTek-based smartphones had a share of 51% at an ASP of US$174 while Qualcomm made a recovery increasing its share to 28% with and ASP of US$244. 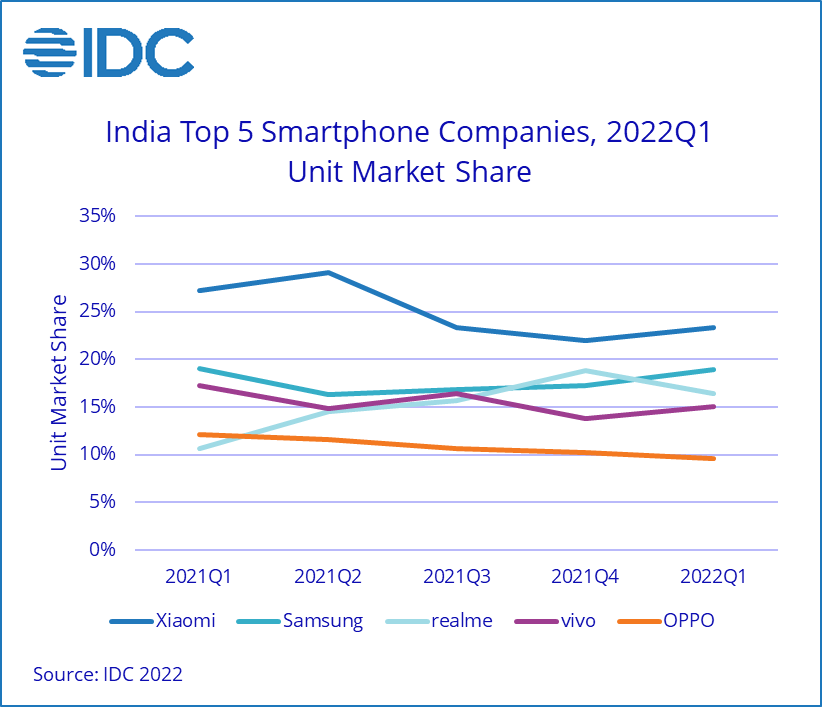 Note: *The "Company" represents the current parent company (or holding company) for all brands owned and operated as a subsidiary.

*Figures in tables/charts rounded to the first decimal point.

Xiaomi continued to lead, though shipments declined by 18% YoY in 1Q22. Its dominance in the online channel remained with a 32% share (including sub-brand POCO). In the 5G segment, Xiaomi jumped to the second slot with volume drivers like the MI 11i series and Redmi Note 11T. However, the ASP of its 5G phones at US$268 was still double that of its 4G phones.

Samsung regained its second slot, registering a YoY decline of 5% in 1Q22. The opening quarter for the Galaxy S22 series witnessed a strong demand with impressive pre-bookings, especially in the offline channel. It also maintained its lead in the 5G segment with a 29% share, the key models being the Galaxy M32 and Galaxy A22.

realme dropped to the third slot but emerged as the only vendor in the top 5 to register a growth of 46% YoY, having the lowest ASP of US$142. It also maintained its second position in the online space with 23% share in 1Q22 supported by affordable C-series offerings.

vivo was at the fourth slot, with a shipment decline of 17% YoY. It continued to lead in the offline channel with 24% share in 1Q22. With the launch of the new T series and additions to its sub-brand iQOO, its online shipments are expected to see movement in upcoming quarters.

OPPO, in the fifth slot, fell 25%. Apart from a huge marketing focus on the mid-premium Reno 7 series, OPPO also launched the K series, placing the majority in the online segment.

IDC Tracker   products provide accurate and timely market size, vendor share, and forecasts for hundreds of technology markets from more than 100 countries around the globe. Using proprietary tools and research processes, IDC's Trackers are updated on a semiannual, quarterly, and monthly basis. Tracker results are delivered to clients in user-friendly Excel deliverables and online query tools.

International Data Corporation (IDC) is the premier global provider of market intelligence, advisory services, and events for the information technology, telecommunications, and consumer technology markets. With more than 1,200 analysts worldwide, IDC offers global, regional, and local expertise on technology, IT benchmarking and sourcing, and industry opportunities and trends in over 110 countries. IDC’s analysis and insight helps IT professionals, business executives, and the investment community to make fact-based technology decisions and to achieve their key business objectives. Founded in 1964, IDC is a wholly owned subsidiary of International Data Group (IDG), the world’s leading tech media, data, and marketing services company. To learn more about IDC, please visit www.idc.com. Follow IDC on Twitter at @IDC  and LinkedIn. Subscribe to the IDC Blog  for industry news and insight