JAKARTA, June 16, 2022 — Indonesia’s smartphone market had a muted start in 2022, declining 17.3% year over year (YoY) and 13.1% quarter over quarter (QoQ) and reaching 8.9 million units in 1Q22, according to International Data Corporation’s (IDC) Worldwide Quarterly Mobile Phone Tracker. Lower consumer buying power due to the higher prices of goods, such as gas and commodities (including mobile phones) and a lower supply of entry-level smartphones in the market were contributing to this decline. There was a tight supply of smartphones in the US$200 and lower price band as low-end 4G chipset supply remained constrained, leading to a 22% YoY decline in this segment. The high YoY decline also resulted from the normalizing demand after the pandemic-induced growth drivers subsided. All factors combined to put additional pressure on a seasonally low quarter.

IDC expects smartphone shipment in 2Q22 to be lower than the shipment in 2Q21. For 2Q22, the Ramadan period gave the necessary boost for April. In addition, the government mandated that the religious holiday allowance (Tunjangan Hari Raya/THR) should be paid in full in April 2022, giving consumers extra liquidity. However, this additional liquidity may be eroded as the government increased the value-added tax (VAT) from 10% to 11% on April 1, 2022, which effetively increases the price of goods. Furthermore, the price of nonsubsidized fuel Pertamax also increased.

"The higher prices are expected to add extra pressure on consumers’ buying power. Vendors may not be able to absorb the price increase above a certain level, thus resulting in higher overall selling price," says Vanessa Aurelia, Associate Market Analyst at IDC Indonesia. Smartphone shipment is expected to stay flat throughout 2022, compared to the 2021 shipment. 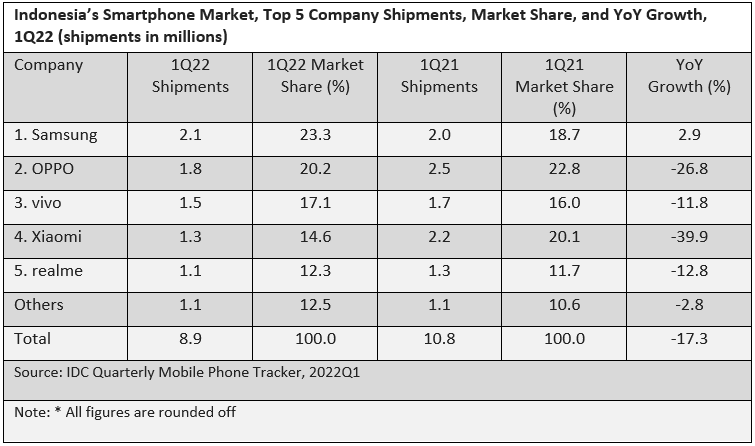 Samsung made it to the top spot in 1Q22 after two and a half years. Samsung released several key models, such as the flagship Galaxy S22 series and Galaxy A03 model, along with other A series refreshes. The newly released Galaxy A53 5G, A52s 5G, and S22 series drove Samsung’s share in the 5G segment to 40%.

OPPO took the second position in this quarter with A95 and A76 as their biggest drivers. Both models, along with the new midrange models released in 1Q22, successfully grew OPPO’s midrange segment (US$200–US$400) by 67% QoQ. 5G shipments, limited to the Reno and Find X series, increased by 56% QoQ. However, the share of OPPO in the 5G segment was considerably lower at 3.7% in 1Q22 compared to 26.4% in 1Q21 as other vendors have expanded their 5G portfolios this quarter.

vivo was ranked third in 1Q22. Its Y15s and Y21 were its biggest drivers. vivo was able to continue growing its midrange segment as the Y33s and V23e continued leading the pack along with the support of newly released models Y75 and V23. The share of its ultralow-end (below US$100) segment decreased significantly as vivo reduced its Y1s shipment in 1Q22. It released more midrange 5G models in 1Q22, doubling its 5G shipments QoQ.

Xiaomi kept the fourth position this quarter despite experiencing supply difficulties during the first two months of the quarter. As supply improved in March, Xiaomi was able to increase the share of its low-end (US$100–US$200) and midrange segments significantly. Xiaomi’s 5G shipments also experienced a sharp gain with the help of the newly released Redmi 11 Note series and Poco M4 Pro, helping Xiaomi maintain its position as the second largest player in the 5G smartphone segment.

IDC Tracker products provide accurate and timely market size, vendor share, and forecasts for hundreds of technology markets from more than 100 countries around the globe. Using proprietary tools and research processes, IDC's Trackers are updated on a semi-annual, quarterly, and monthly basis. Tracker results are delivered to clients in user-friendly excel deliverables and online query tools.

International Data Corporation (IDC) is the premier global provider of market intelligence, advisory services, and events for the information technology, telecommunications, and consumer technology markets. With more than 1,200 analysts worldwide, IDC offers global, regional, and local expertise on technology and industry opportunities and trends in over 110 countries. IDC's analysis and insight helps IT professionals, business executives, and the investment community to make fact-based technology decisions and to achieve their key business objectives. Founded in 1964, IDC is a wholly-owned subsidiary of International Data Group (IDG), the world's leading tech media, data and marketing services company. To learn more about IDC, please visit www.idc.com. Follow IDC on Twitter at @IDC and LinkedIn. Subscribe to the IDC Blog for industry news and insights.