SINGAPORE, 29 July 2022 – According to the IDC Worldwide Quarterly Mobile Phone Tracker, 67.2 million smartphones shipped in China in 2Q22, down 14.7% year-on-year (YoY). In the first half of the year, the market also saw a 14.4% YoY decline with around 140 million units. Although the overall smartphone market showed weak momentum, foldables stood out by growing about 70% YoY with more than 1.1 million shipments in 1H22. 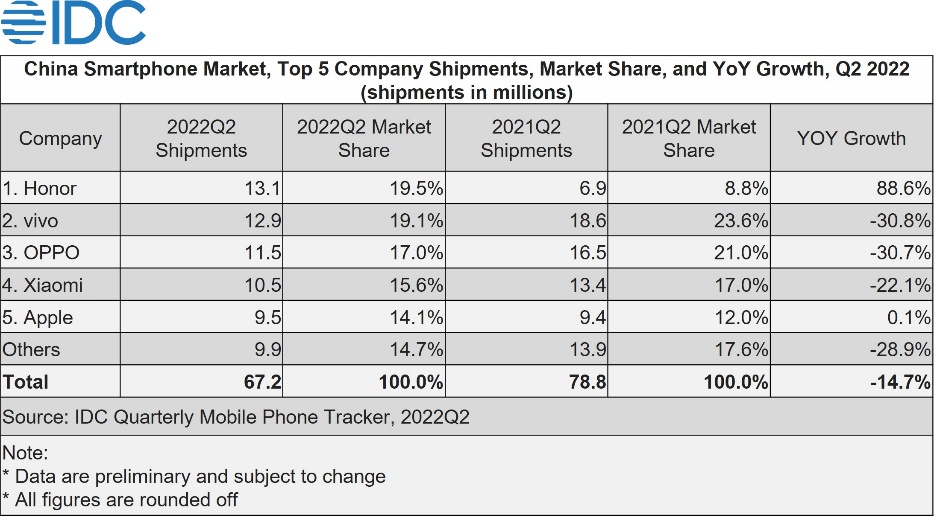 “COVID lockdowns severely hurt consumer sentiment in 2Q22 while also dampening demand in the second half of the year,” said Will Wong, Senior Research Manager for Client Devices at IDC Asia/Pacific. Wong adds, “Nevertheless, both Honor and Apple managed to show some hope by recording YoY growth in shipments and share in 2Q22.”

• Honor climbed to the top spot as its new Honor 70 series helped to sustain its high growth. While the budget-friendly Changwan 30 series and Play 6 series met the needs of the entry-level segment, the Magic 4 series also allowed Honor to strengthen its share in the >US$600 high-end.

• vivo ranked second in 2Q22 and gained share from the previous quarter. The flagship series of its sub-brand, iQOO, performed well in the online channel in June, while vivo’s new X series was well received in both offline and online channels. The company achieved a nearly 12-month high share in the high-end market.

• OPPO continued to utilize its Reno and A series as its volume drivers, with the Reno 8 series and the A57 model each shipping more than two million units. Furthermore, the Reno 8 series helped OPPO to remain the leader in the US$200-$400 mid-range segment.

• Xiaomi’s market share also grew from the previous quarter. Its Redmi K series and Redmi Note series were the volume drivers as the market began to see a recovery and sales promotions in May. During the “6.18” shopping festival, lower pricing supported the sales of the high-end Mi 12 series.

• Apple’s iPhone 13 was the volume driver in the quarter as the company significantly lowered the model’s pricing in channels like JD.com while also reducing the mix of its predecessor in the online “6.18” festival. The iPhone 13 accounted for more than 60% of Apple’s shipments, which in turn, helped the vendor to achieve a flat growth from a year ago.

In the first half of 2022, foldable smartphones grew despite the overall market’s decline. Huawei was the leader in the foldable market with more than 63% share, mainly supported by its strong brand name. OPPO grabbed the second spot with the differentiated design and competitive pricing of its Find N model. Samsung ranked third, while its Galaxy Z Flip3 and Z Fold3 came to the end of its product cycle. Honor and vivo were in the fourth and fifth spots, respectively as a result of their conservative strategies. 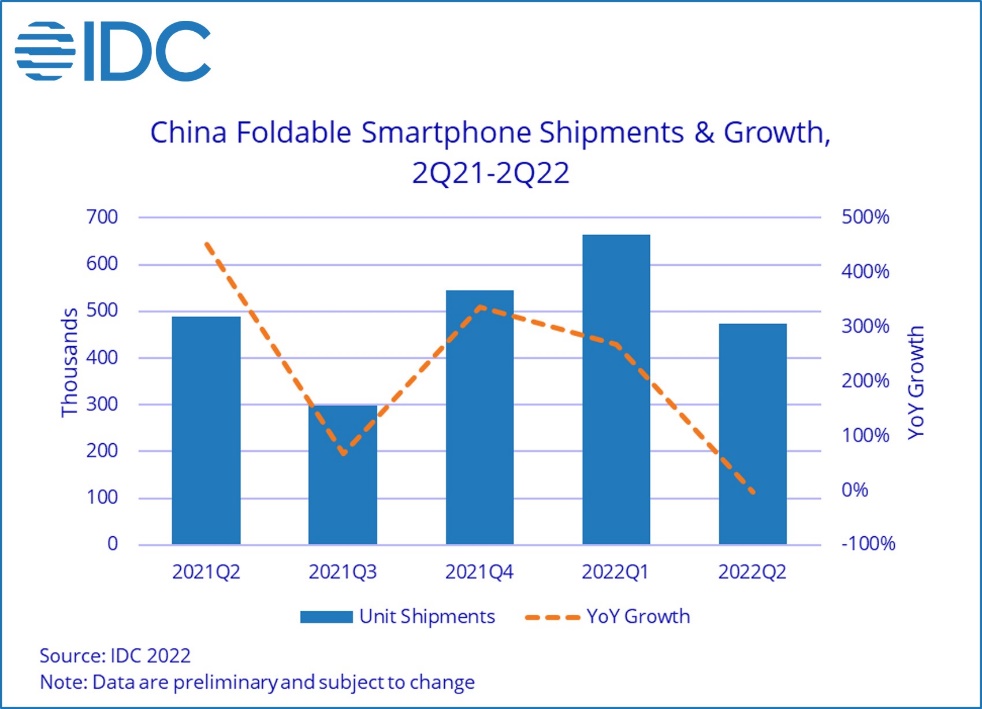 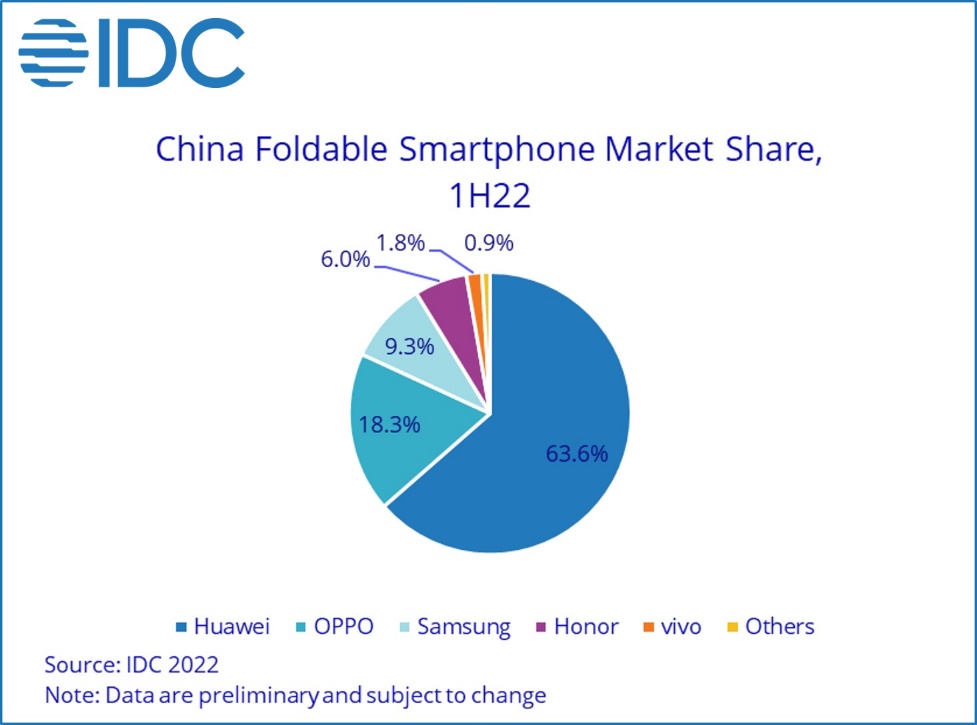 “The COVID outbreak and the lack of product upgrades in the mid-range and high-end segments restrained consumers’ willingness to spend,” said Xi Wang, Research Manager for Client System Research at IDC China. Xi adds, “Nevertheless, the favorable growth of foldables shows that product innovation is still able to make consumers open their wallets.”

In the context of worldwide, smartphone shipments declined 8.7% year over year in the second quarter of 2022 (2Q22), according to preliminary data from the International Data Corporation (IDC) Worldwide Quarterly Mobile Phone Tracker. This marks the fourth consecutive quarter of decline for the smartphone market as shipments fell to 286.0 million units in the quarter, about 3.5% lower than forecast. Read more on the worldwide smartphone tracker HERE.

International Data Corporation (IDC) is the premier global provider of market intelligence, advisory services, and events for the information technology, telecommunications, and consumer technology markets. With more than 1,300 analysts worldwide, IDC offers global, regional, and local expertise on technology and industry opportunities and trends in over 110 countries. IDC's analysis and insight helps IT professionals, business executives, and the investment community to make fact-based technology decisions and to achieve their key business objectives. Founded in 1964, IDC is a wholly-owned subsidiary of International Data Group (IDG), the world's leading tech media, data and marketing services company. To learn more about IDC, please visit www.idc.com. Follow IDC on Twitter at @IDCAP and LinkedIn. Subscribe to the IDC Blog for industry news and insights.