MANILA, August 30, 2022 – Smartphone shipments in the Philippines declined by 3.1% in 2Q22 compared to last year, although it grew 9.1% quarter-on-quarter (QoQ), shipping 4.3 million units in 2Q22, according to the International Data Corporation’s (IDC) Quarterly Mobile Phone Tracker.

“The number of smartphone shipments below US$ 200 improved significantly QoQ, as players such as Transsion and Cherry Mobile launched new models in this segment, but remained low on an annual basis, due to low demand and supply. The number of shipments for models in the higher price categories also slowed down as consumer spending declined due to economic headwinds,” said Angela Medez, Market Analyst at IDC Philippines. 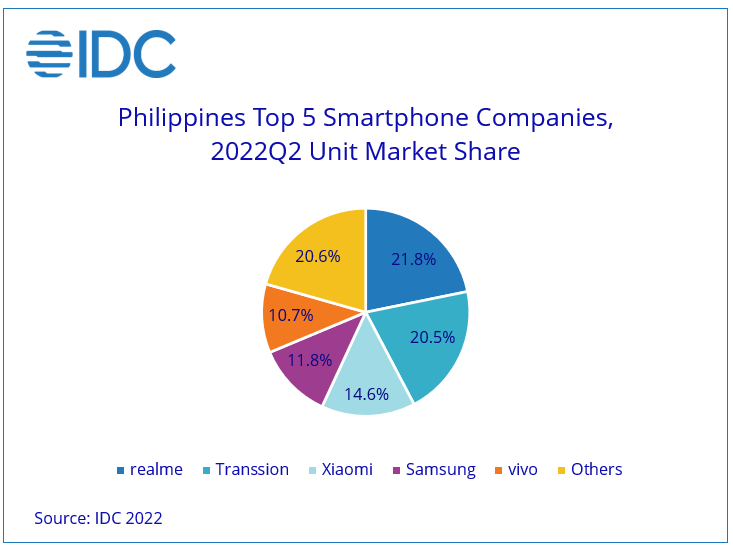 Note: The "Company" represents the current parent company (or holding company) for all brands owned and operated as subsidiary.

“The rising cost of living and higher prices of essential goods and staple foods will continue to put pressure on consumer spending on smartphone. IDC expects 2022 will end with marginal growth of 2%, or flat compared to 2019,” added Medez. 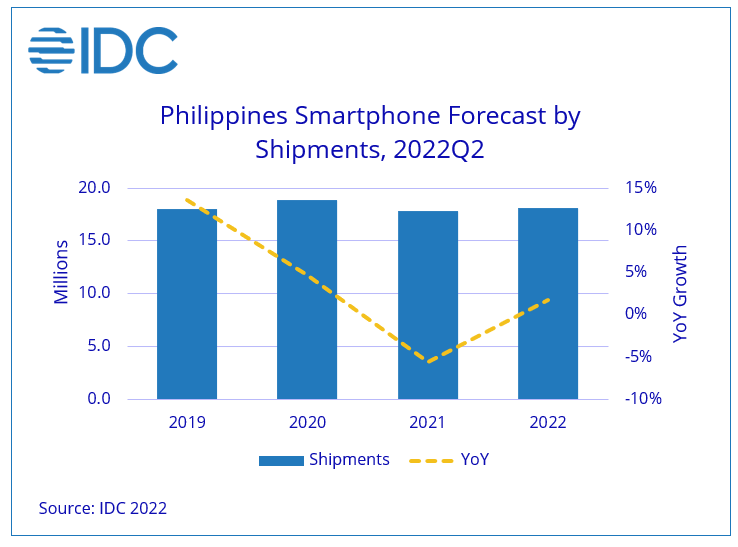 For the sixth consecutive quarter, realme remained in first place with 21.8% share of the smartphone market, with a growth rate at 17.5% QoQ and the introduction of their 9th series managed to drive its growth in the mid-range segment (US$ 200<US$ 400). realme launched its TikTok store, live shopping session, and became the first smartphone brand to do so in the Philippines.

Still in second place, Transsion’s total shipments increased by 152.2% YoY and 13.5% QoQ, capturing 20.5% of the market in 2Q22. Infinix’s retail expansion plans and marketing campaign catapulted the brand threefold YoY, accounting for nearly 60% of Transsion’s shipments. Lower consumer spending has benefited Transsion with an average selling price of only US$103, compared to US$194 for the overall smartphone market.

Accounting for 14.6% of the smartphone market, Xiaomi climbed to the third place, growing by 1.2% YoY and 12.1% QoQ. Its Redmi 10C drove the low-end portfolio (US$ 100<US$ 200), which made up 59.8% of its shipments and lowered its overall ASP to US$ 167. Its sales through eTailers continued to drive growth with Xiaomi consistently listed as the best-selling mobile phone brand during Shopee’s monthly sales campaign.

"With telecommunications company PLDT recently announcing plans to shut down their 3G network by 2023, we may see a faster migration from feature phones or older smartphones to newer models that support 4G or 5G. Note that the number of 3G cellular subscribers in the Philippines are quite low at less than 5% of total subscribers," said Medez.

International Data Corporation (IDC) is the premier global provider of market intelligence, advisory services, and events for the information technology, telecommunications, and consumer technology markets. With more than 1,300 analysts worldwide, IDC offers global, regional, and local expertise on technology, IT benchmarking and sourcing, and industry opportunities and trends in over 110 countries. IDC's analysis and insight helps IT professionals, business executives, and the investment community to make fact-based technology decisions and to achieve their key business objectives. Founded in 1964, IDC is a wholly owned subsidiary of International Data Group (IDG), the world's leading tech media, data, and marketing services company. To learn more about IDC, please visit www.idc.com. Follow IDC on Twitter at @IDCAP and LinkedIn. Subscribe to the IDC Blog for industry news and insights.