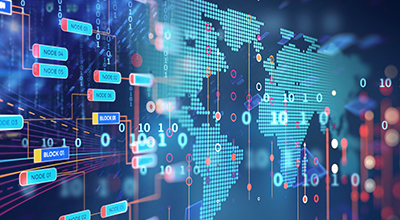 LONDON, March 26, 2019 — Despite a slow start, Europe is now one of the fastest-growing regions worldwide for blockchain spending. This is due to a number of factors, such as enterprises moving blockchain to production and a wave of local start-ups driving marketing and sales activities.

According to IDC's Worldwide Semiannual Blockchain Spending Guide, 1H18, published in February 2019, blockchain spending in Europe will reach more than $800 million in 2019, with Western Europe accounting for 83% of spending and Central and Eastern Europe 17%. Total spending in Europe will reach $3.6 billion in 2022, with a 2018–2022 five-year compound annual growth rate (CAGR) of 73.2%.

"In terms of technologies, IT services, such as consulting, outsourcing, deployment and support, and education and training, will drive spending, accounting for nearly 63% of European spending in 2019, growing at a 2018–2022 CAGR of 76.6%," said Carla La Croce, senior research analyst, Customer Insights and Analysis, IDC. "This is because blockchain needs to step up and demonstrate its production-readiness, and businesses need to ensure they take a long-term strategic view of their overarching blockchain initiatives."

Blockchain emerged out of the financial sector and the technology is now well established there, whether as a POC or a real deployment in production, with banking the leading industry in terms of blockchain spending in Europe. Finance will account for a third of total spending in 2019, with widespread uses, from trade finance and post-trade/transaction settlements to cross-border payments and settlements, as well as regulatory compliance. Insurance is expected to be the fastest-growing industry over the 2018–2022 forecast period, with a CAGR of 81.3%.

Blockchain is also growing in other industries, with ongoing experimentation bringing to light new use cases in areas such as manufacturing and resources (accounting for 19% of total spending) and other supply chain related industries such as retail, wholesale, and transport (accounting for nearly 15%).

"Interest in blockchain among supply chain industries is seen in the increasing number of use cases for tracking products, such as lot lineage provenance and asset/goods management, from food to luxury goods," said La Croce. "The aim is to reduce paperwork, make processes more efficient, prevent counterfeiting, and improve trust and transparency with trading partners and consequently with their customers as well."

"IDC also sees strong competition between cloud giants to host, manage, and service the emerging blockchain ecosystems, especially from IBM and Microsoft, along with Amazon, Oracle, Google, and SAP, with Alibaba and Huawei expected to play an increasing role in the East," said Mohamed Hefny, program manager, Systems and Infrastructure Solutions, IDC. "Building consortiums and recruiting the leading enterprises in various segments is becoming a race in blockchain now, and as a result we are witnessing a growing number of large pilot projects."