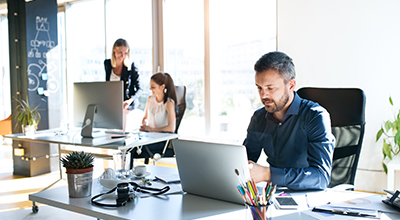 LONDON, November 12, 2021 — After a strong start to the hardcopy market in the first half of 2021 the initial signs of supply chain issues finally came to light in 3Q21 as the market contracted by 21.5% compared with a year ago as most brands simply didn't have enough inventory to fulfill orders. According to research by International Data Corporation (IDC), the Western European printer and multifunction (MFP) market stood at 4.07 million units in 3Q21 compared with 5.19 million a year ago.

The major product segments of inkjet and laser both made double-digit declines as manufacturing constraints, logistical issues, and high demand in the first half of 2021 meant that few brands could supply all the required hardware and supplies to their channel partners and customers. The overall inkjet segment declined by 19.5%, with business and consumer markets suffering from a lack of supply, but not all brands saw declines and those that had sufficient stocks captured more share of the market.

The overall laser segment contracted by 27.1% and all areas of the A4 and A3, monochrome and color, and printer and MFP market declined by double-digit figures. This means that most gains seen in 1H21 were wiped out; as with the inkjet market, however, there were some successful brands that had inventory to take over some accounts.

"Increased demand for home working and education print devices because of the pandemic has now come to an expected end as supply chain issues have led to many orders being unfulfilled, and this is likely to continue for the rest of 2021 and for some it will continue into 2022," said Phil Sargeant, program director, Western European Imaging, Hardware Devices, and Document Solutions group, IDC. "Most brands are suffering from inventory issues and this ultimately affects revenues and profits, with some feeling the effects more than others."

• Laser shipments declined by 27.1% for the quarter; all segments of the market declined.

Overall growth in the Western European HCP market was strong and there were some very good performances. The main country highlights are shown below.

German shipments declined by 16.5% in 3Q21 — an effective decline of almost 83,000 units to give a market size of 900,000 units. German inkjet markets contracted by 16.0%, with declines in both consumer and business markets. Laser shipments declined by 17.3%; most segments saw double-digit declines and A4 color printer was the only area that saw any growth, even though that was minimal. The largest laser segment in Germany was for A4 monochrome printer devices.

French shipments were below the Western European average, declining 27.4% for a market size of 759,000 units. Inkjet shipments declined by 27.7%; most of this decline was from consumer devices while business inkjets only marginally suffered. The total laser market declined by 26.1% and all segments posted double-digit figures.

The Italian market declined by 23.7% for a market size of 516,000 units. Inkjet shipments declined — not as much as in other countries, but it was still a double-digit decline of 11.7%. Laser shipments were much lower than in other major countries, declining by 43.2% with no segments showing any sign of increases.