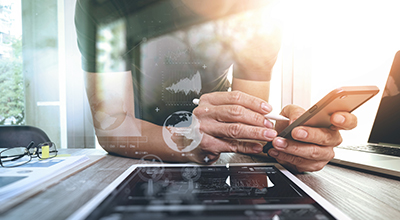 Shipments of Wearable Devices Reach 118.9 Million Units in the Fourth Quarter and 336.5 Million for 2019, According to IDC

FRAMINGHAM, Mass., March 10, 2020 – The worldwide market for wearable devices grew 82.3% in the fourth quarter of 2019 (4Q19), reaching a new high of 118.9 million devices shipped according to new data from the International Data Corporation (IDC) Worldwide Quarterly Wearable Device Tracker. The stunning growth was largely due to the proliferation of hearables, which captured 55.3% of the entire market. Other popular categories that also experienced growth during the quarter included watches (15.3% year-over-year growth) and wrist bands (17.7% growth). Wrist-worn devices captured 43.8% of the total market, down from 68.6% last holiday season. Though the share for wrist-worn devices has declined, the category itself grew 16.3% over the same period. For the entire year, vendors shipped a total of 336.5 million wearable devices worldwide, resulting in an 89.0% increase from the 178.0 million units shipped in 2018.

"2019 marked a strong step forward for the worldwide wearables market," said Ramon T. Llamas, research director for IDC's Wearables Team. "Hearables were the big story due to new product introductions and more smartphones cutting the cord with traditional earphones, practically driving users to purchase a hearable. Not to be overshadowed were smartwatches and fitness trackers, which both posted record annual volumes from an abundance of lower-cost models."

"The market for wearables is also quickly becoming very top heavy as companies such as Apple and Samsung capture a greater share of the market," said Jitesh Ubrani, research manager for IDC Mobile Device Trackers. "While these giants put pressure on the rest of the market, there continues to be plenty of innovation and differentiaion amongst the smaller brands and this long tail of the market will carry on for the forseeable future."

Apple led the market with 43.4 million units shipped in 4Q19 thanks to its refreshed AirPods, AirPods Pro, and Apple Watch as well as its Beats products spanning multiple price points. However, as the company's products did well overall during the quarter, Apple Watch shipments declined 5.2% year over year as the company experienced supply shortages.

Xiaomi ranked second shipping 12.8 million wearables of which 73.3% (9.4 million) were wristbands. The share of wristbands within Xiaomi's overall wearables portfolio has declined from 4Q18 when they accounted for 81.8% of shipments, reflecting a growing trend towards hearables and, to a lesser extent, watches landing in China.

Samsung finished in third place thanks to a strong portfolio of products as well as multiple brands under its belt, including JBL and Infinity. Key to its success was its Galaxy Active and Active 2 smartwatches, broadening its audience from multi-purpose device users to health and fitness-focused enthusiasts. Driving volumes forward was its strategy to bundle wearables with its smartphones, which further developed its distribution with carriers.

Despite political pressure, Huawei grew its wearable device shipments 63.4% with overall. Wristbands accounted for the vast majority of its shipment volume but growing the most were its watches with several kids' watches and the GT2. Huawei also added several new hearables to its portfolio, keeping its selection aligned with the other market leaders.

Fitbit rounded out the top five and saw its shipments rebound for the first time following two consecutive years of declining volume. The company still relied on its fitness trackers to drive volume, but its smartwatches nevertheless reached a new record with six million units shipped for the year thanks to the release of its Versa 2 and discounted Versa Lite and Ionic.

* IDC declares a statistical tie in the worldwide wearable device market when there is a difference of one percent or less in the unit shipment shares among two or more vendors.

Earwear continued its strong march forward with 170.5 million units shipped worldwide for the year, resulting in an eye-popping 250.5% improvement from the 48.6 million units shipped in 2018. While the focus of hearables is on the audio experience, including rich quality audio and noise cancellation, the list of devices including other features, such as coaching, language translation, and smart assistants, underscore additional use cases beyond audio.

Wristbands finished 2019 with 69.4 million units shipped worldwide, up 37.4% from the 50.5 million units shipped in 2018. This is a notable improvement over the flat volumes hovering near 48 million units over the past several years. While the latest trend has been for wristbands to mimic smartwatches with notifications and messages, most of the volume came from simple step counters and heart rate trackers.

Watches reached 92.4 million units shipped in 2019, up 22.7% from the 75.3 million units shipped in 2018. Here, Apple finished the year much in the same way it began the year – as the undisputed leader in the smartwatch market with 28.5% market share. This is the first time Apple's annual market share dipped below forty percent as companies like Huawei, Samsung, and multiple smaller vendors gained ground.